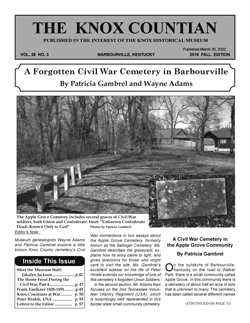 The Fall issue of the Knox Historical Museum's quarterly magazine, the Knox Countian, edited by Charles Reed Mitchell, is now available for purchase at the Museum in Barbourville or via the online Museum Store.

The cost per magazine at the museum is $3 while the cost via the website is $3 plus 6 percent sales tax and a $1.25 shipping fee.

A summary follows below for Volume 28-3.

Request about the Barbourville Brickyard and its employees 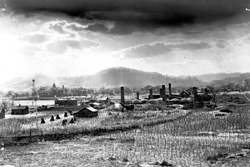 Information sought about the Barbourville Brickyard and its employees.

The Knox Historical Museum is in need of photos and information concerning the Barbourville Brickyard from its inception in 1905 until its closing in 1957. The photos and/or information needed include: 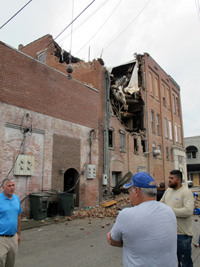 Editor's Notes: The following article was taken from WKYT-TV  about the the old Parker Building in Barbourville, whereby a wall section fell on June 7, 2021 and the building was becoming the victim to the wrecking ball. The Parker Building  was initially erected in 1909 but became the home of the Union National Bank in the early 1920's.

The  Parker Building also once contained a dentist and a library, both on the second story. A ballroom and meeting room for clubs, such as the the Moose Club, were held on the third story. 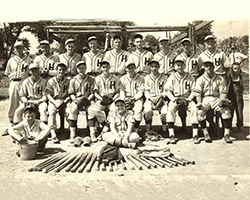 This aerial view of Union College and neighborhood in Barbourville, Kentucky appeared in the College's 1958 Stespean annual.