A memorial service was held Wed., April 26, 2017 for a Civil War soldier from Knox County, Kentucky who was buried in an unknown grave in the Nashville National Cemetery in 1862.

The service for Benjamin Shorter, who died of dysentery and fatigue in a Nashville hospital, was held at 5 p.m. at the Barbourville City Cemetery. All descendants and interested parties were invited, said event spokesman Jakalyn Jackson of Cannon, Kentucky.

Ms. Jackson is a great-great granddaughter of Benjamin Shorter, who served the Union side in Company A of the 8th Kentucky Infantry based at Camp Dick Robinson in Garrard County, Kentucky near Lancaster.

Ms. Jackson's mother was Genell Jackson, nee Oxendine. Genell's mother was Dora Oxendine, nee Shorter. Dora was the daughter of George Shorter, who was a son of Benjamin Shorter.

"He was listed as an unknown and was buried in an unmarked grave in Nashville," said Ms. Jackson. "I just couldn't bear this, which led to this memorial service and new tombstone with his name and dates inscribed."

Attached is article about Benjamin Shorter and the memorial service published in the Barbourville Mountain Advocate on May 4, 2017. The author is Advocate reporter Emily Baker: 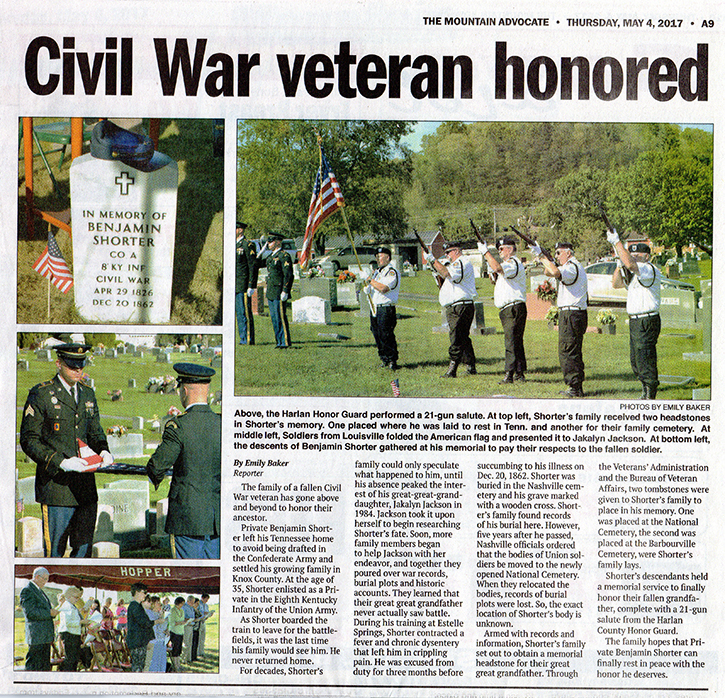 Attached is article about Benjamin Shorter and the memorial service published in the Barbourville Mountain Advocate on April 20, 2017. The author is Sharron Oxendine, who is a great-great granddaughter of Benjamin Shorter.