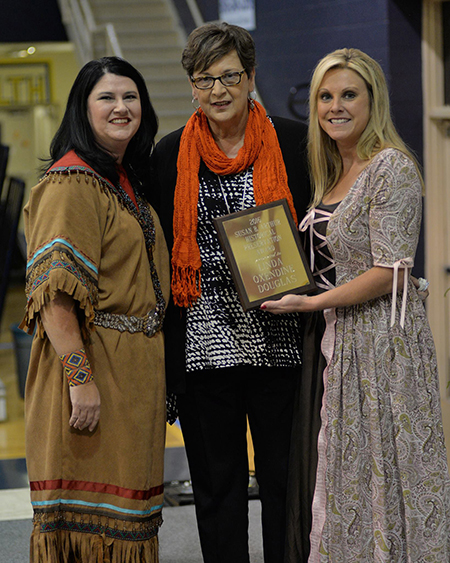 Educator, musician and children’s champion, Linda Oxendine-Douglas was announced as the winner of the eleventh Susan Arthur Historical Preservation Award during last year’s 69th Daniel Boone Festival, 2016. A twenty-seven year veteran teacher at G. R. Hampton Elementary, Linda Oxendine rebelled against her students’ learning from textbooks set in only urban and suburban areas. She joined the Eastern Kentucky Teachers’ Network in the 1980s to meet and join with other teachers who wanted to celebrate and honor their mountain heritage.

Linda’s children learned to read while writing about real life experiences in their everyday lives. Linda’s second graders wrote, produced and performed their weekly WYWY radio show, “Knox County Kids,” with minimal assistance. They were in charge of their learning.

Linda’s children were taught and performed old timey children’s favorites like “Lazy John” and “Shady Grove,” while she accompanied them on the dulcimer. Linda’s weaving of mountain culture and music into her everyday lessons instilled a sense of pride into her students’ lives that is still felt today.

History and culture came alive in Linda’s classroom as she invited local historians and musicians in to visit with her children. A. L. and Kathleen Phipps, Bonnie Carr, her parents Sherman and Lucy Oxendine were frequent visitors talking about Daniel Boone, Dr. Thomas Walker, quilting and singing mountain songs and storytelling.

In 1988 and 1989, Linda and several other mountain teachers shared their classroom experiences with former Governor Bert T. Combs and Judge Ray Corns. Linda spoke of the lack of teaching resources in her classroom, school and district, as well as the nearly non-existent training for and use of technology. Linda and others’ depositions would become the basis for the landmark 1990 Kentucky Education Reform Act.

Linda won numerous awards during her 27 years in the classroom including being inducted into the inaugural class of the Union College Educators’ Hall of Fame, as well as being given the Campbell’s Soup “Portrait of a Teacher Award.” Linda and her students were the focus of a 1992 Appalshop Production, Hands on: a Year in an Eastern Kentucky Classroom. The film followed Linda and her 24 second graders for a year. Hands On is still shown from time to time on Kentucky Educational Television, and Linda’s advice and help is sought out from a new generation of Kentucky educators.

Linda, Jakalyn Jackson and David Helton co-authored Knox County, Kentucky: A History Book for Children. The idea came from Linda’s students’ being inquisitive about their home county and wanting to know more about Barbourville and Knox County.

Linda’s teaching has had a lasting effect on her many students. One former student writes to Linda, “You are by far my most memorable teacher, and my inspiration for choosing the teaching profession.” Another student writes, “I always looked forward to Daniel Boone time because I loved to hear you sing and play your dulcimer.” A colleague of Linda’s shared her thoughts as well, “Linda inspired not only her students but her fellow teachers and administrators with her passion for teaching. She never chose the easy path of shallow teaching....”
Linda hasn’t stopped sharing her love of Appalachia with the children of Knox County. For the past several years during this week of the Daniel Boone Festival, Linda, Leann Butler and Zach Callihan visit most of the schools in the county and share stories, tall tales, and play and sing for students while dressed in their period attire. She teaches children’s Sunday School at Felts Chapel Methodist Church in Corbin, where she and husband Charlie are members.

(Adapted from an essay by By Sharron Oxendine)