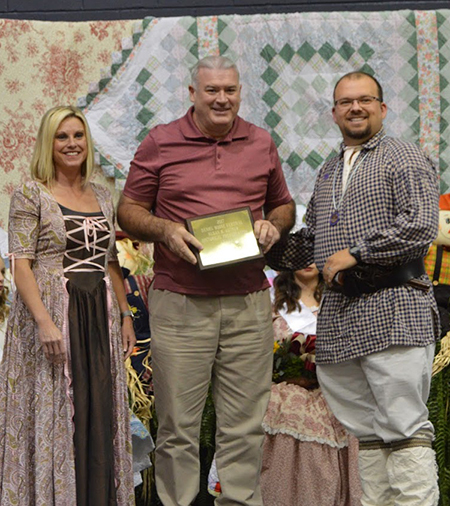 Douglas Bargo, a key volunteer at the Knox Historical Museum, has received the annual Susan Arthur Historical Preservation Award. The award was presented by the GFWC/KFWC Barbourville Junior Woman's Study Club in October 2017 during the Daniel Boone Festival.

In photo at left, Doug Bargo is in the center. The presentation was made by the Junior Woman's Study Club's Tonya Castle, left, and Boone Festival president Travis Carmack.

Doug came to the Knox Historical Museum in 2011 in search of information about a cemetery along Highway 229 that had Civil War soldiers buried in it, with hope to find a way to have its historical significance recognized. After a talk with Museum President Michael C. Mills, he became more curious about southeastern Kentucky’s local history and joined the museum staff.

Since then, Doug has done the following:

In addition, Doug’s experiences at the American Fidelity Bank, Phillips and Associates, CPAs, and with the CSX Railroad Company gave him a practical level of financial knowledge that has been of much benefit to the museum staff.

Museum President Michael Mills calls him one of the most faithful and hard-working researchers, knowledgeable docent, exhibit arranger and photo editor on the museum staff. There is scarcely an area of museum operation that has not felt his touch.

In short, in less than half a dozen years, this man has become an indispensible man at the Knox Historical Museum: Assistant Editor of The Knox Countian, Co-Editor of the museum’s annual “Barbourville History Calendar,” and Assistant Manager of the museum’s website and Facebook account.

And if that’s not enough of a recommendation, he is a member of the Daniel Boone Festival Committee, active with the Long Rifle Shoot and other festival events.

Since September 1985, Doug has been married to Tammy Smith, daughter of Shirley Smith of Gray and the late J.D. Smith. Doug and Tammy reside at Gray, Kentucky.