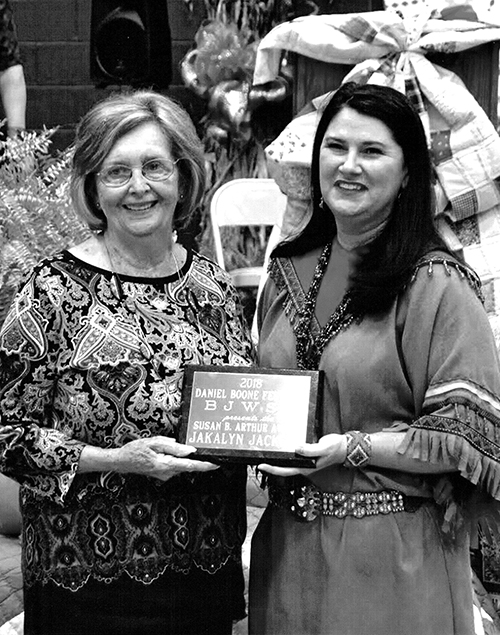 Jakalyn Jackson, a woman of many talents, worked very hard over the years to preserve and promote Knox County's heritage and history.  The daughter of Glen B. and Genell Oxendine Jackson, Jakalyn learned the value of collecting stories and oral history at her grandmother's knee. She has spent her entire life collecting and preserving family and local history.

In 1959, she graduated from Knox Central High School. She was librarian at the Knox County Book Mobile, worked for the Knox County School System and after a number of years retired from the US Postal Service.

She began her work as a genealogist in the Knox County Historical Society, the earlier embodiment of the Knox Historical Museum. As one of the founders of the museum, she has worked faithfully and diligently at the organization for many years as a writer, genealogist and researcher. She has been involved in exhibition design, document collection and record keeping as well as being a frequent contributor to The Knox Countian, the publication of the museum.

While working at the museum, she pioneered an award-winning educational program, which she called her Suitcase Museum, bringing museum artifacts and her own personal collection of Indian arrowheads and primitive tools to nearly every Knox County school for students to handle and spur questions about the history of their home county.  For her educational efforts with her Suitcase Museum, the Historical Confederation of Kentucky granted her the first place award in education among the state’s museums and historical organizations during the museum’s earlier years.

Seeing how her school visits raised many questions from children about their southeastern Kentucky heritage, Jakalyn co-authored with her cousin Linda Oxendine Knox County, Kentucky: A History Book For Children (1992), a museum project sponsored by Clarence Ossie Burch. The limited edition was placed in every school in the county.  She also co-authored three books of Knox County cemeteries, co-authored the Isaac Jones Family History Book, she assisted with Looking Back with Michael Mills and the Knox County Historical Society, Inc. She researched and contributed to the Knox County, Kentucky: History and Families as well. She has written many articles for the Barbourville Mountain Advocate and writes extensively on local communities and their institutions, especially the Cannon community.  In 2006 she persuaded her family members to write their first collection of family stories and continues to be the major contributor for each annual volume. By 2018 the 10th volume had been completed.

Jakalyn supports the community by membership in several organizations. She has served on the Daniel Boone Festival committee, is a former member of the Tuesday Club and the Barbourville Garden Club as well as the Town and County Homemakers Club. Since 1991, she has been an active member of the General Levi Casey Chapter of the American Daughters of the American Revolution.

As she presented Miss Jackson with the 2018 Susan Arthur award, Preshus Doolin of the Barbourville Junior Woman’s Study Club said, “This quiet natured, powerful woman has made her family proud. Her leadership, guidance and many talents have always been shining stars in her family crown. She is the queen of her family. Her story collecting that began as a child is still very much alive today. Her contributions will command the thanks of generations to come, and her family eagerly awaits the next story written by this year's recipient of the Susan Arthur Historical Preservation Award...Miss Jakalyn Jackson.”