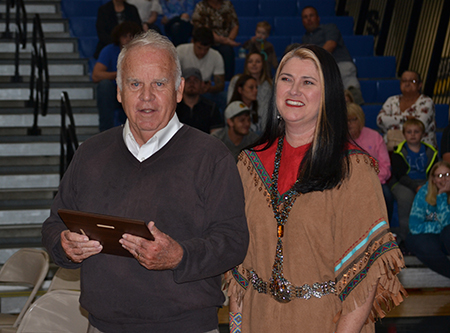 This year’s recipient has worked very hard during his lifetime to preserve and promote Knox County’s heritage and history! He is a man of many talents and he tells his stories thru pictures! He has spent his life collecting, photographing, writing about and preserving our local history.

Bert Scent was born in 1944 to AB and Lanien Scent here in Barbourville, KY. Mr. Scent grew up here in Knox County and attended Barbourville City School where he graduated and went on to attend and graduate from Eastern KY University. After graduation from EKU, Mr. Scent was a homebound teacher for a few years before getting hired in the job he was passionate about for many, many years. More about that passion is coming up. Mr. Scent also served on the city council, committed to the preservation of Knox County, for 16 years.

Now, about that “passion” job. Mr. Scent was hired on and worked for the Barbourville Mountain Advocate for just over 38 years! During his career he attended pretty much every event going on in our small community, especially during Daniel Boone Festival time. Things weren’t digital and quick like they are now. You couldn’t edit and photo shop things then. So in order to tell the tale of the event and share it with those around, beautiful and inspiring photos were taken of just about every activity by someone to tell the stories. Mr. Scent was that someone. No one really knows how many photos he has taken over the years, photos that have told the stories of love and spite, victory and despair, kindness and anger, heart and soul, compassion and irrelevance. It was something he was meant to do...tell stories through photography.

Around 1980 Mr. Scent opened his photography business and has photographed hundreds of families, weddings and other special moments. He has given memories to so many families in our community. One club member stated that Bert was the only one to ever photograph her family.

In 1976 he was united in marriage to Linda Scherrer. To this union two wonderful boys were born, Micah (who is married to Missy) and Jonah (who is married to Marissa). He is also the proud grandfather to four beautiful children, Bailyn, Jonas, Graham and Grace...the loves of his life. His hobbies include his grandchildren, of course, computers and gardening.

So to quote Fred Barnard of Printers Ink from 1927… “A picture is worth a thousand words”! Imagine the history Mr. Scent has helped to preserve with his pictures...more than words could ever describe.