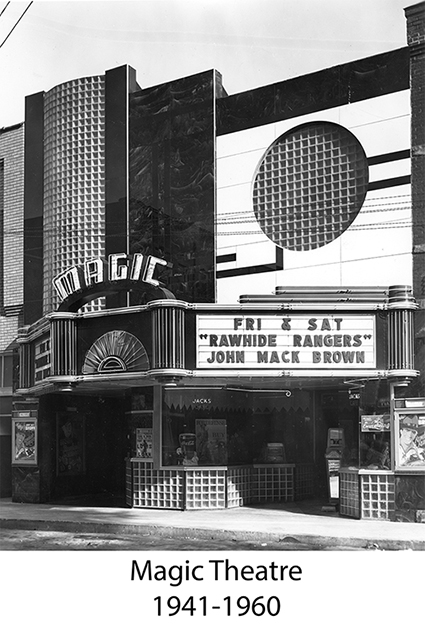 The deterioration of the old Magic Theatre marquee on the Court Square in Barbourville, Kentucky, has long been a concern of local historians and others who remember its heyday, roughly from 1941 through 1960.

The deterioration has become so bad, in fact, that owners Gary and Karen Gray Campbell, who operate Nationwide Insurance at the location, were, until recently, at a loss for what to do next. Several contractors who looked at the marquee had advised them to “tear it down,” citing safety concerns.

However, through the efforts of a local organization – the Knox Historical Museum – as well as individual volunteers, the cooperation of the owners, and the interest shown by a local club –the GFWC Kentucky Barbourville Junior Woman’s Study Club – the marquee just might be saved.

This is in line with efforts by other organizations, such as the City of Barbourville, Barbourville Tourism, and the Main Street program, to preserve the historic value of downtown Barbourville.

The Museum and its president, Michael C. Mills, and 2nd vice president, Steve Valentine, got involved last year (2015) after noticing that the marquee’s paint, which had been peeling or scaling off, had been stripped off completely.

After speaking with and getting a positive reception from the Campbells, Mr. Mills asked Mayor David Thompson to have city engineers look at the structure for safety issues.

“They did find that there were some bad issues but pronounced it okay for us to work on the marquee and try to save it.”

Immediately, said Mills, he and others inspected the marquee in more depth and found it in even worse condition than expected in terms of rust in the structural support. This led them to the project’s first major step. 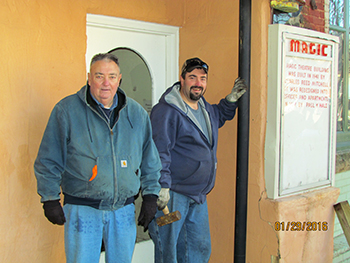 On Saturday, January 30th, Mills and volunteers Gary Ledington and son Allen Tye Ledington installed a large steel post with anchors underneath the marquee. This will help support an I-beam that rests on brick posts. The Ledingtons also altered the size of the donated steel post and did necessary welding. The post itself was donated by Mike and Kimberly Mays Mills.

“That was the first thing,” Mills said. “The next step – Step 2 - will be to replace some framing that is rotted due to leakage from the roof above.

“Step 3 will involve determining what’s causing the leak, which we think is caused by a defective downspout that is stopped up, and repairing that. At worst, we would have to repair some of the roofing.”

After all this is completed, Mills said, the next step will be to paint the marquee back to its original colors, which will be based on historical color photos and input from the Museum’s Charles Reed Mitchell, whose grandfather built the Magic and Mitchell Theatres.

Asked when he hoped to finish all these steps, Mills said, “We’d like to have it painted by spring at the latest. We want to see this project through where it is sound and not a safety issue, maybe even putting some lighting on it.”

Mills then pointed out another strong supporter for the project: “The Barbourville Junior Woman’s Study Club has called me and asked me to come and speak to their club on the 16th of this month [February]. I was told they have already discussed this project and would like to help with finishing it.

“This is extremely good news,” he said. “So far we’ve gotten everything volunteered – the steel post, labor and everything – but there will come a point as we make repairs when we need more help. We really appreciate the interest the Barbourville Junior Woman’s Study Club is showing in the completion of this project. We appreciate all individuals and clubs that come together to work on projects such as this.

“We, and there’s many more who think like me, would hate to see the marquee taken off the Court Square. Maybe we can save it in its present condition for many more years.”