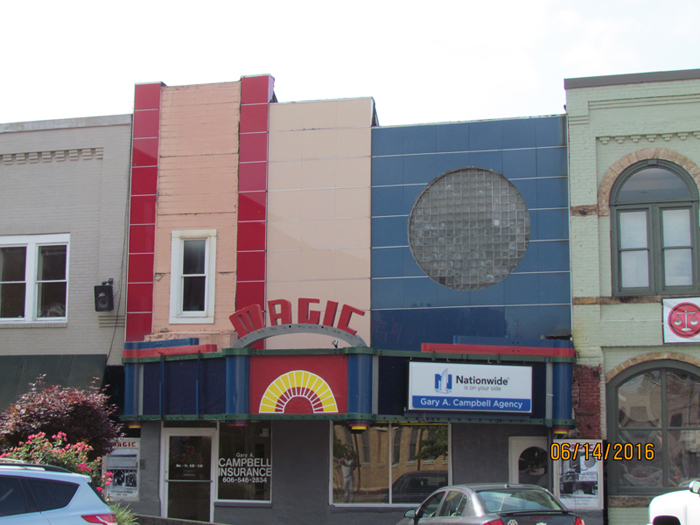 The next time you drive around the Court Square in Barbourville, Kentucky, please take notice of the old Magic Theatre's red, yellow and blue marquee. And know this: the marquee, which dates back to 1941, was nearly demolished just a few short months ago.

What brought the marquee to its near-extinction was the identification of serious structural issues and deterioration matters that contractors said were expensive to address.

This information in turn led building owners, Gary and Karen Campbell, who operate a Nationwide Insurance agency, to seriously consider the removal of the marquee.

Just in time, however, along came the Knox Historical Museum and its preservation-minded president, Michael C. Mills, which were soon joined by the GFWC Kentucky Barbourville Junior Woman's Study Club.

"The Junior Woman's Club gave us $5,000 to use on the project," Mills said, "of which we've spent roughly half of what the club gave us. . . and with the club's approval, we are looking for other projects in the downtown where we can make a difference and help preserve our downtown.

"I don’t mind being quoted. Our court square is running down badly. It needs a lot of attention. The old awnings, for example. They’ve got to be dealt with."

Mills then gave a rundown on what was done on the marquee project. 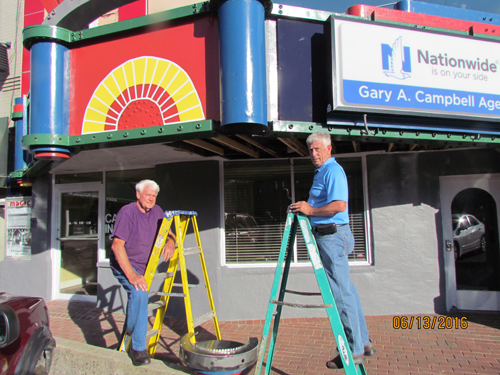 "The first thing we had to do - several people had told the owners they couldn't save it and it was going to fall down on the right side - was to secure the marquee and build some framework inside. So that was No. 1: to keep it from coming down and be safe and secure.

"The next big issue was to address a severe drainage issue, which we did with volunteer labor from Jim Smith who works with Keck's roofing company in Corbin.  He installed a state of the art drainage system which has a shield that won't let garbage get in. This was donated."

Other volunteers on the project include Gary and Allen Leddington who did welding;  Larry Mills and Harry Mays who did carpentry; and the Museum's 2nd Vice President Steve Valentine.

Mills also listed restoring and remounting the medallions or rings which hang down on all four corners of the marquee, but the biggest expense, he said, was the painting.

"Everything had to be totally stripped and cleaned, primed and then painted as close to the original colors that we could find through photographs and motion picture reels.

"Overall, we're pretty pleased with it. It looks good going around the square, but nobody seems to notice it but us. That's been the biggest disappointment.

"We hope to get the word out to everyone about the Magic Theatre marquee project and want to invite other individuals, clubs and organizations to join us and the Junior Study Club in helping preserve and beautify our downtown."