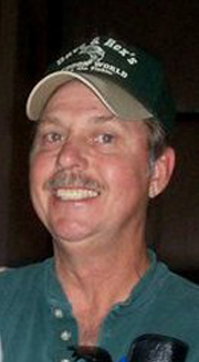 An officer of the Knox Historical Museum is playing a key role in an organization that promotes the route that Daniel Boone blazed through Knox County and four other Kentucky counties in 1775.

The KHM’s 2nd Vice President Steve Valentine serves on the board of directors of the newly incorporated Friends of Boone Trace, Inc., whose overall purpose is to save and preserve the trail blazed by Daniel Boone and his thirty ax-men in March and April of 1775 from North Carolina through the Cumberland Gap to Boonesborough.

You might remember newspaper and television coverage last spring (2015) of two men that hiked the entire length of the trail from Kingsport, Tenn., to Boonesborough, Ky. Their names were Curtis Penix and Givan Fox. Mr. Valentine and Doug Bargo, another member of the Knox Historical Museum, joined them during a portion of their hike through Knox County.

Although officially established a couple of years ago, the Friends of Boone Trace was recently re-incorporated with a broader purpose which includes an expanded board of directors and economic development. It has held meetings in several locations, but most recently in London, Kentucky, which is most centrally located.

“One thing we’re doing,” Mr. Valentine said, “is we’re approaching legislators about the Boone Trace. We want it to be officially designated as an historical trail – with signage and hiking and driving trails.”

Mr. Valentine urges those interested in learning more about the trail to visit the Friends of Boone Trace website at boonetrace1775.com. The website has many resources, including a digital map of the trace, videos, newsletters, and historical links. There’s also a public group on Facebook, called “Friends of Boone Trace, Inc.,” which has 277 members at present.

The “Friends” founder and president is Dr. John Fox of central Kentucky, who is passionate about the overall project, stating on the organization’s website: “It was the first road, ever, to bridge ‘the Wilderness’ into Kentucky for the specific purpose of bringing in settlers. No other road is of greater historical significance to the founding of Kentucky and opening of the west than ‘that little road.’ And it comes right up through the heart of Kentucky!”

All five counties involved in the route have representatives on the Friends of Boone Trace board of directors. Besides Dr. Fox, officers are vice president Charles Hayes, secretary Tom Black, and treasurer Jasper Castle.

The organization’s next scheduled meeting is March 4th at the London Courthouse.

The Knox Historical Museum has been an active supporter of the Friends of Boone Trace since its founding and has, on its own, researched and mapped the trail through Knox County. Museum president Michael C. Mills has been a driving force behind the effort to map the Boone Trace in Knox County. See the Museum’s website (knoxhistoricalmuseum.org) for description and maps of this trail in Knox County.

Said Mr. Valentine about the effort, “Right now, we are seeking permission from private landowners who are part of the trace to hike across their property, but we’re also working with the state to get liability for these landowners.”

Mr. Valentine is a native of Heidrick, Ky. He is a former president of the Daniel Boone Festival. In 2012, he received the Susan Arthur Preservation Award from the GFWC/KFWC Barbourville Junior Woman’s Study Club.