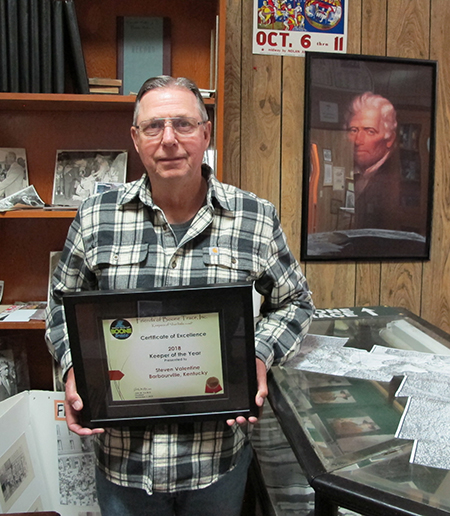 The Knox Historical Museum's Steve Valentine was honored on Nov. 7, 2018 at the annual meeting of the Friends of Boone Trace held at Berea College.

At the meeting, Valentine received the organization's Keeper of the Year certificate for his involvement in and coordination of a walk on the Boone Trace at Elys Hollow Loop in Knox County this past summer. Valentine provided also provided a bus and worked in partnership with Barbourville Tourism.

According to the Friends of Boone Trace website, the organization's sole purpose is to save and preserve the Boone Trace. This was the trail blazed by  Daniel Boone and his thirty “axmen” in March and April of 1775 from North Carolina through the Cumberland Gap to Boonesborough.

Steve Valentine is currently 2nd vice president and a primary docent of the Knox Historical Museum located in Barbourville, Ky.