A future issue of the museum’s magazine, The Knox Countian, will include a tribute and family history written by Bill Dishman a couple of decades ago.

The family named the Knox Historical Museum for contributions in memory of Bill Dishman. We are grateful to the family and especially thank Mrs. Dishman, Janelle Hogg Dishman, for this honor, the first time the museum has been mentioned for memorial contributions.

The museum received a substantial grant from the Lily Foundation of Wayne, Pennsylvania, in memory of William M. Dishman and fifteen of Bill’s friends and associates sent donation checks to the museum as tributes to Mr. Dishman. 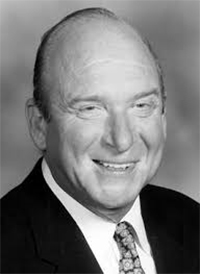 William McGeorge Dishman, Jr., 80, of Danville, passed away Tuesday [29 November 2016] at Ephraim McDowell Regional Medical Center in Danville. He was born in Barbourville, Kentucky on March 16, 1936, to the late William and Mary Hughes Dishman and is survived by his loving wife of 38 years, Janelle Hogg Dishman.

He practiced law for 48 years with Silliman, Dishman and Nickels, and of Counsel with Sheehan, Barnett, Dean, Pennington, Little, Dexter Tucker, and Thornberry. He served as general counsel for Inter-County Rural Electric Cooperative and was also a director of The Old Bank and later the Bank of Danville.

A member of First Christian Church, he was an Elder Emeritus and Trustee Emeritus. He served on the boards of the Ephraim McDowell Regional Medical Center Foundation and the Salvation Army. He was a member of the Danville Country Club, the Lexington Cotillion and The Old Goat’s Club.

William was preceded in death by his parents, brother, Ulmont Taylor, and a sister, Lily Dishman Bangert.

In lieu of flowers, memorial contributions can be made to the Salvation Army and The Knox County Historical Museum, 196 Daniel Boone Dr., Barbourville, Ky. 40906. www.prestonpruitt.com