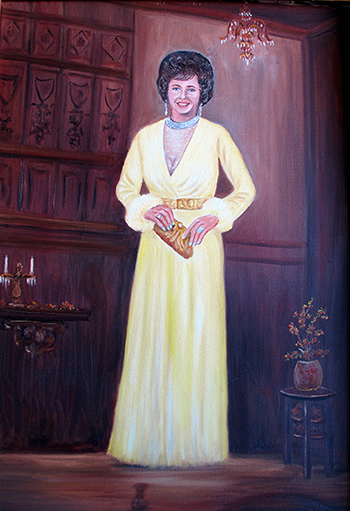 The donation was made by Barbara Nash of Bourbon County, Kentucky. Mrs. Nash was the power of attorney for Mrs. Mills and served her as a personal assistant from 1988-1992. The items included a large oil painting of Mrs. Mills by James Wright of Lexington, Ky.; a gavel used by Mrs. Mills as president of the National Conference of Appellate Court Clerks association in 1974-75; and a portrait of Frances at age four in 1924.

According to the Knox Historical Museum's Knox County, Kentucky: History and Families, Frances was the daughter of Dr. William H. Jones and Bertie Steely Jones. She was educated in the Knox County schools and then attended Union College, Eastern Kentucky State College and Cumberland College in Williamsburg from which she graduated. She taught for eight years in Knox County schools. In 1949 she married Gene Mills.

Frances Jones Mills died in 1996 and is interred in Williamsburg, Kentucky.