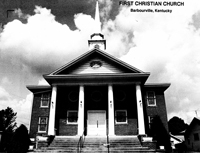 Editor's Note: This article taken from the Volume Six, Number Three edition of The Knox Countian - a quarterly publication of the Knox Historical Museum.

by The Reverend Phillip E. Connley
with a Conclusion
by Dr. Connie Danner

For the 140th Anniversary of his church's founding in 1983, the Reverend Phillip E. Connley wrote a "History of the Barbourville First Christian Church," which was bound in a spiral booklet for distribution among the congregation. Connley's history is especially rich in its description of pre-Civil War religious activity in Knox County, listing many prominent early families and observing the rivalry of various denominations for control of the community's religious life. The essay deserves wider distribution than a private printing.